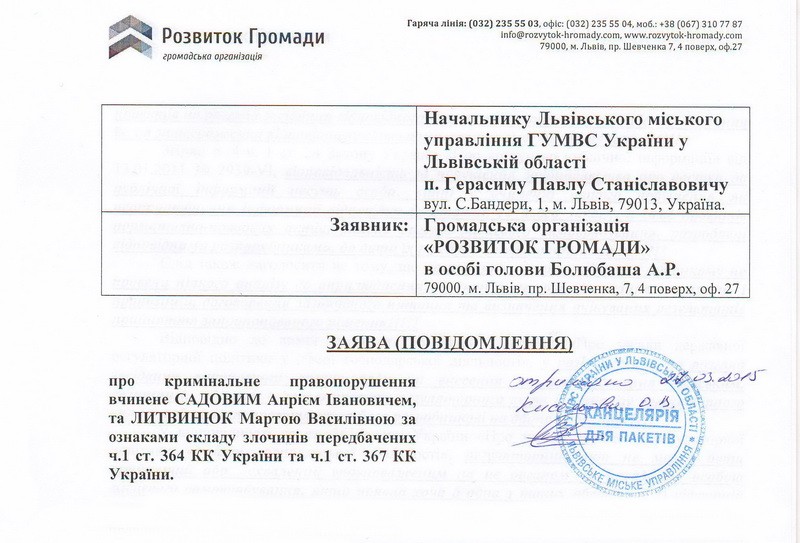 Instagram
The Executive Committee of the Lviv City Council, including responsible officials as Mayor – Sadovyi A.I.  and Litvinyuk M.V. made a criminal offense and broke 15 Laws of Ukraine.

NGO “Community Development” ("Rozvytok Hromady")  in the person of the head of  NGO - Andriy Bolyubash addressed to the head of the Lviv City Department of  Internal Affairs of Ukraine in Lviv region -  Gerasim  Pavlo Stanislavovych with the application for a criminal offense committed by the executive committee of  Lviv City Council.

According to the heads of the Lviv City Council Sadovyi  A.I. and  Lytvynyuk M.V.  signing the decision № 115 from 10.03.2015 on the abolition of privileges to public transport for certain categories of up to 10 hours. am and after 16 hours p.m., they violated several laws.

"This violation of the law entails consequences in the form of substantial harm to legally protected  rights and interests of citizens, namely the right for free travel on city transport for privileged categories of people," - said the lawyer Andriy Bolyubash.


The above violations of  local government is criminal, and the responsible for their commission, officials should be held criminally responsible. Also note, that the pre-trial investigation in the form of a preliminary investigation of a violation of  law head of the Lviv City Council should be started immediately.