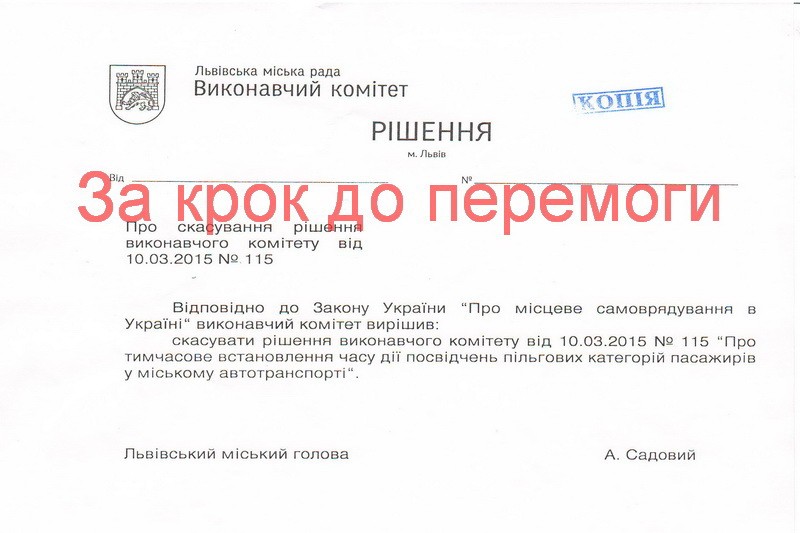 Instagram
Lviv citizens today have previously sought the cancellation of illegal decisions of the Executive Committee of the City Council.

Representatives of public organizations of the Union of large families of Lviv region "Happy family" (“Shchaslyva Rodyna”), "Mothers of Chornobyl" (“Materi Chornobylya”), "Wormwood of Chornobyl" (“Polyn Chornobylya”), “Lviv regional organization of the Ukrainian Blinds Association” (“LOO ”UTOS”) “Ukrainian Union of participants of ATO” (“Ukrainska spilka uchasnykiv ATO”), "The Afghan hundred"(“Afganska Sotnya”), " Slaves are not allowed to heaven" (“Rabiv do Rayu ne puskayut”), "Community Development" (“Rozvytok Hromady”) and in collaboration with people with disabilities and other socially vulnerable residents of the city went on an indefinite protest action to protect the right of free use of public transport.

Under the walls of the City Hall (“Ratusha”) outraged by the implications of the resolution of the Lviv City Council regarding the decision "On the temporary establishment of the time of validity of certificates of special categories of passengers in city vehicles" citizens demanded to cancelation of the illegal ruling. Because fares are legislatively defined on the entire territory of Ukraine, they can’t be suspended or restricted on the basis of the decision of the Executive Committee in separate regions.

The Chairman of the NGO "Community Development" Andriy Balubash appealed to the community of the Lviv city and told what the reason of today's demonstration. The lawyer stated that the public Association has collected more than 40 signatures in support of the cancellation of the decision of the City Council No. 115 from 10.03.2015.

"This is a violation of the Law! Not the City Council gave to us those privileges and they can’t cancel them!" said a participant of the Union of large families of Lviv region "Happy family" (“Shchaslyva Rodyna”).

After enunciated speech activists, and representatives of public organizations, as well as several citizens of preferential categories went to the office of the mayor of Lviv Andriy Sadovyi, but he was not at the workplace.

"This illegal decision should be reversed. Today we are here with one purpose - to achieve cancellation of illegal decisions, which restricts the rights of the 19 privileged categories of persons, indicating a violation of many Laws of Ukraine. If we fail in our requirements, we will declare a perpetual silent protest in the walls of the City Council," said lawyer Andriy Balubash.

To listen to all the complaints of citizens and members of the public appeared Andriy Moskalenko - the Director of the Department of administration of Mayor LCC. As a result of a lively discussion, the head of the legal Department of the Lviv City Council Helena, Pinkevich gave to activists a draft decision “On cancellation of the decision of the Executive Committee from 10.03.2015 No. 115”.

This decision, as assured in the Lviv City Council, will be voted at the meeting of the Executive Council on Monday, March 23, at 14:00. Social activists are closely looking after the course of events.