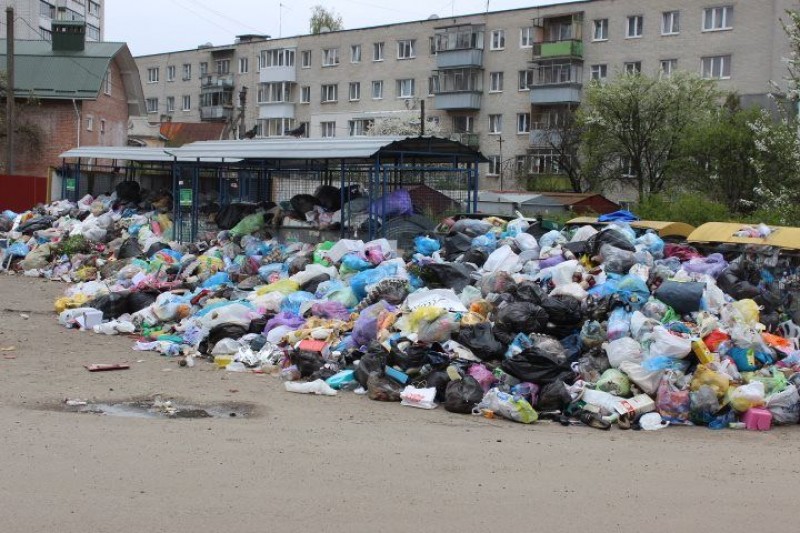 Instagram
While residents are forced to block the roads in order to draw attention of the government to unremoved garbage from their homes, when they pay for daily arrivals of a garbage truck and rubbish removal, communal services of the city properly remove waste from the mansion of the mayor on these funds.

At the same time, the city authorities did not solve any issue about the reclamation of the Grybovytskyi landfill, the neutralization of the filtrate on it, the search for sites and the construction of a new landfill for solid waste and a waste recycling plant. Also, during this period, the city authorities did not conduct any tender on the landfill choosing for waste disposal, as well as tariffs setting for the transportation of solid waste. On the other hand, the city authorities classified the information about landfills which carried garbage during the last year, what directly contradicts the legislation.

But after the police inspections on budget funds spending on the Lviv garbage transporting across the country, with the publication of fake enterprises which conduct waste disposal, city officials, apparently with a loss of profits on it, decided to change this corrupt scheme to another and asked the government to announce the state of ecological emergency in Lviv.
Unfortunately, the mayor has not conducted an official investigation of the causes and guilty people in the illegal money laundering on the garbage removal from the city yet.

Thus, at the meeting of the city committee of the state of emergency, the director of the legal department of the LCC, G. Paionkevych, reported that, due to the city council's inability to follow the instructions of the State Procurement Service on the removal of solid waste, we give an assignment to the Lviv mayor, in accordance with the Law of Ukraine “ On the area of an emergency ecological situation”, in the manner prescribed by law, to contact the head of the Lviv Region State Administration, the Prime Minister of Ukraine regarding the announcement of administrative territories of Lviv the area of emergency ecological situation.

As a result, the authorities feed the society with a false information about real causes of the announcement of an emergency, in particular, instead of announcing an only one and true cause - their own inaction to deal with the issue of garbage, which led the city to the threat of an epidemy of infectious diseases, they announced - the inability of the mayor's office to deal with the order of the State Procurement Service to remove the solid municipal waste from Lviv in time - untill the 12th of May 2017.

It should be noted that Article №5 of the Law of Ukraine “On the area of an emergency ecological situation” defined the basis for declaring a particular area as an area of emergency ecological situation, among which there is no basis such as the inability of local self-government bodies to deal with the instructions of the territorial bodies of the State Procurement Service regarding the removal of solid waste.

In our case, the emergency ecological situation in the city is caused by the inaction of the mayor and his team, and not by natural or man-made factors, therefore, due to the absence of agreements between the city and owners of landfills for waste disposal, the landfill construction or recycling plant, such situations will repeat every two or three months, because the one-time garbage removal from the city will not solve the problem.

But actually, due to the real threat to the life and health of a large number of people, caused by the inaction of the mayor's office, generated by the corruption appetites, there is no doubt that Lviv will be declared as a zone of emergency ecological situation.
Undoubtedly, the removal of a significant amount of garbage is a good opportunity to continue corruption schemes which are related with the garbage transporting to unknown landfills, without any tenders, because the city council has not chosen any landfills for the disposal of municipal waste, nor a tariff for the transportation of waste in the country yet. Moreover, the financing of this scheme will be provided not only with the local budget but also with the state budget too.

It is possible that the corruption scheme will remain the same, but the source of financing will be more powerful.
Nevertheless, in the case of introduction within the area of an emergency ecological situation in accordance with the Law of Ukraine “On the Legal Status of an emergency state”, the following measures may be implemented:

- a temporary ban on the construction of new and expansion of existing enterprises and other objects, whose activity is not related with the liquidation of an emergency ecological situation or to ensure the livelihood of the population;
- mobilization of enterprises' resources, institutions and organizations irrespective of the forms of ownership, change of their working routine and profile of production activities within the limits which are necessary for carrying rescue and restoration works;
- compulsory alienation of the objects of the law of private property with the obligatory subsequent full reimbursement of their value.

It is possible that the liquidation of the consequences of the inaction of the mayor’s office, not only budget funds, may be conducted with the resources of enterprises, institutions and organizations, regardless of ownership forms. The criteria for involvement such resources remains to be unknown.

It is also possible to stop the activity of enterprises that form large amounts of organic waste, for example markets, supermarkets, and catering establishments. Here we should recall the conflicts between the mayor's office and a number of such enterprises. But will old conflicts be remembered, will restrictions work on these enterprises, as well as building enterprises will be unknown?

To sum up, the announcement of the territory of  Lviv as a zone of emergency ecological situation involving the resources of the state, enterprises, organizations and institutions will allow to liquidate for a short period of time a threat of the epidemy of infectious diseases which can be caused with a rotting watse, because waste generation is an unsustainable process and requires a systemic solution.

Overcoming the consequences of any problem is possible by liquidation the main cause, not its consequences. Therefore, the garbage issue solution in the city depends on the quality of city management.