Instagram
The activists of "Rozvytok Hromady" took part in the round table of top official with the public. Acting a.i.of the Head of Lviv Regional State Administration Yuriy Turiansky has reported to the community about 100 days of his activities as head of the region.

For the  NGO  "Rozvytok Hromady" as an active institution of society, it was important to hear the results of the head of the field. According to the words of Yuriy Turyansky during the August-October, compared with the previous three months, the volume of  industrial output increased by 2.3%.  Also increased the output in the food industry and the pharmacy. In the plan there is to increase coal production. Today on the mines of Lviv region 5000 tons of coal are produced every day,  in January 2015 the plans are  to produce 7 thousand. tones, and in February - 8 thousand tons of coal daily.

Also the head of the region reported, that soon the Parliamentary Committee may approve allocation of 20 million USD for the repair of Lviv perinatal center in Lviv.

"Worthy of respect is in particular, that the chairman of  Lviv Regional State Administration  conducts an open dialog with the public. In terms of anti-terrorist operations in Eastern Ukraine, it is important, that during the last months the priority areas of  Lviv Regional State Administration were military assistance, mobilization and defence work "- said the human rights activist - Andriy Bolyubash. 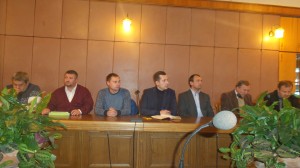 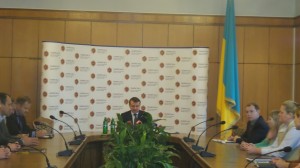