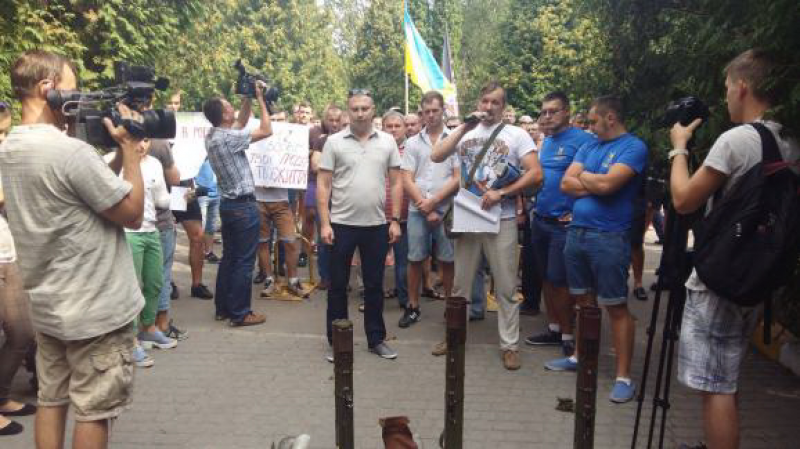 Social organizations initiate perpetual shares for the liberation of the city from the Russian goods, services and economic relations with the country of the aggressor. On Monday, August 17, starting with "VS Bank" that is on Grabovskogo str., 11, community activists organized an open-ended campaign against Russian banks in the Lviv region. Employees of PJSC "VS Bank" do not miss the media and refused to comment on the situation, thereby ignoring a peaceful picket of the citizens of Ukraine. In the office of "VS Bank" requirements of activists were signed, so now they will wait for further actions of agencies. Lviv citizens have handed over a letter to the leadership of the Bank and declare a clear demand: "Russian banks to leave the territory of Lviv region in the next two weeks. Because, Russian banks – are banks of the aggressor". Activists also set the flag of Ukraine on the building.

Then about a hundred of protesters went into the "Sberbank of Russia" at the address Chornovola str., 2B. Employees of the banking institution, closed in the room and refused to talk with the activists, who in turn were unable to transfer administration of the institution a letter from NGOs, so pasted it directly into the window of a banking institution. It should be noted that for the peaceful protest joined also ordinary passers-by , who supported the demands of social activists.

Third but not the last Bank that the public tends to close was the Russian "VTB Bank". In the office, which is located at the address Valova str., 15, a group of activists managed to enter and transmit the appeal from NGOs with the requirement to stop work until 31 August. The employees of the Bank promised to transfer the appeal to the leadership in Kiev. Social activists expect a corresponding reaction from the managers of the banks in the next two weeks.

The public of Lviv seeks to terminate the activities of branches of institutions of the aggressor country and plans to do the following:


1. To conduct a thorough identification of Russian goods on the bar codes and the information specified in the certificates of conformity, which contains information about the country of origin;

2. To send an open letter to the members of the Ukrainian trade Association and most retailing trades of the country, urging them to unite, to show patriotism and support the initiative for the liberation of networks against Russian goods;
3. To send a message to the heads of the Pro-Russian banks with the requirement of "eviction from the territory of Lviv" until August 31.