Instagram
Daily escalation of the conflict in the East of Ukraine is gaining new momentum. The course of events is so fast that it is impossible to predict what will happen tomorrow. In order to hold our positions in Donetsk and Luhansk regions was signed, by the President, a decree on the fourth wave of mobilization. However, according to the rules of war, we should think not only about the front line of defence, but also about unoccupied territories of Ukraine.

Ukrainians long ago have lost their peace. The Echo of anti-Ukrainian sentiments during the last six months are also heard in peaceful areas of the country.During this time, sabotage was committed in five cities: Kyiv, Kharkiv, Odessa, Kiev and Zhitomir. Explosions in some of these settlements occurred repeatedly, and the sacraments are still not found.

Earlier media mentioned about calls regarding mining of various buildings in different cities of Ukraine. Lviv is one of those cities. It is worth mentioning,the persistent reports in 2014 of bomb threats in Lviv National Academic Opera and Ballet Theatre, the shopping centre "King Cross" and "Opera Passage", Lviv Chamber of Commerce, the main train station, and the regional administration. Thanks to the work of the police, was found only one person that gave false information to law enforcement authorities about the location of the explosives. Where is the disclosure of others intruders? 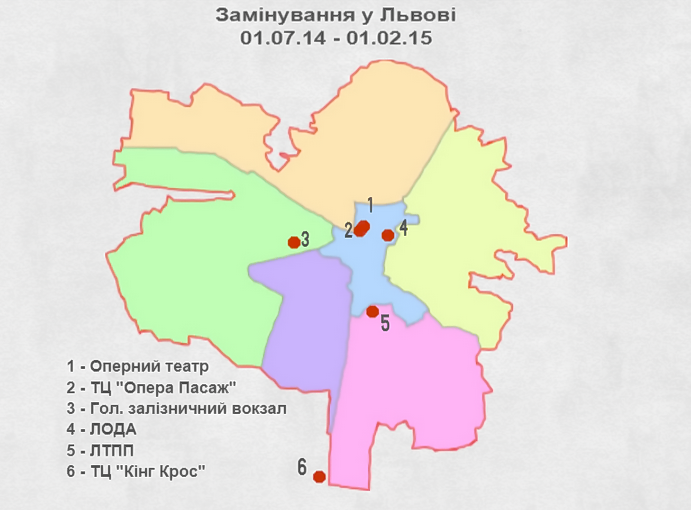 Recently, deputies of the Parliament are actively discussing the reform of the police. Headed by Eka Zguladze, first deputy of the head of the Ministry of Internal Affairs of Ukraine, scheduled for competitive recruitment of new staff and employees of State Automobile Inspection and Patrol Service.It also refers to salary increases for law enforcement officers. But there it is not mentioned about the increase of state police in the cities, especially now during this difficult time for the country. This question is particularly urgent for Lviv.

The city is officially not recognized as millionaire, but according to the Migration Service now there are about 1.4 million people in Lviv. As a result of anti-terrorist operations in Eastern Ukraine according to official data from the occupied territories moved to Lviv 9352 people, according to unofficial - that number is 3 times larger.Accordingly in the regional center located most of the migrants. However, the state police in Lviv still not increased. As noted by the Deputy Chairman of the Commission of parliamentary activity and the legality of the Lviv city Council Sergiy Smirnov: “the State inspectors and policemen are sorely understaffed”.

It is important that the number of the district inspectors in cities is determined according to the official number of inhabitants. At 6000-8000 residents must be 1 a district inspector. For example, 220 thousand inhabitants of Frankivsk neighborhood should account 32 policemen and their total number in the district police station should be 150. However, for today employs around 40 police officers, of which 22 actually work.

It is noteworthy that not all migrants were registered in Lviv for temporary residence, which makes it impossible to do a full count of displaced workers of the Department of statistics. Hence the question whether Lviv is provided with a sufficient number of patrolmen to prevent and control crime?

For several years, from 2011 to 2014, in Lviv rapidly began to develop tourism. As a result, a strong and successful campaign for Euro 2012 Lviv City began to visit weekly nearly 5 million tourists. However, with the increasing of the number of migrants increases the number of statements to the police about the theft and disorderly conduct. According to official statistics, during October-December to police stations in six districts of Lviv received 8200 statements, but in January this number greatly exceeded - 3250 references. 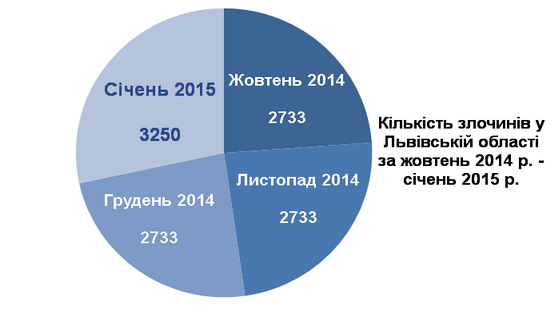 As a conclusion, for the last month it was committed 1.2 more crimes, than each previous. Why our law enforcement agencies have let this happen? Perhaps they did not have enough human resources to maintain order?

Over the past year the level of security in Lviv significantly decreased. The reputation of a peaceful, inclusive city is destroyed forever. Do not search reasons in migrants who were forced to move here. Responsible for the increase of criminality in Lviv is our government, our law enforcement agencies, who either do not want to see (or have an official order not to focus public attention on the urgency of the problem), or does not have enough power to quickly respond to illegal acts.

According to the unofficial sources of NGO "Rozvytok Hromady" ("Community Development").