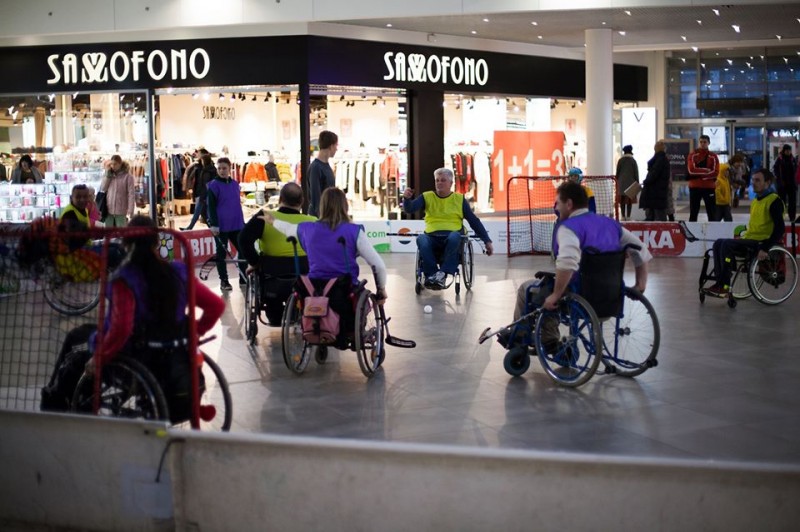 Recreational Games “The Step to Olympus” is a unique event that teaches social equality and respect.

This year, recreational event for people on wheelchairs was held on Friday, November 22, to the Day of Dignity and Freedom in the largest shopping mall of western Ukraine “Victoria Gardens”.

Recreational games, which are organized each year by NGO "Rozvytok Hromady", have gathered more than 30 disabled people on wheelchairs from different parts of Lviv region. Participants of the games competed in three sports disciplines: floorball, table tennis and korfball.

Later, for the first time, within the frame of recreational games was held an open cup of intellectual game "Mind game". Nine teams competed for the title of "the smartest", five of which were formed by people with disabilities on wheelchairs and four of them were formed by organizers, participants in the Russo-Ukrainian war, and visitors of the shopping mall.

We sincerely thank all friends and partners for their help in organizing the event.

More photos at the link

“European Assembly of Women-deputies.” presented the initiative of “Corner of Goodness” with the diploma, as one of the best in 2019

“Together for child”: The meeting of experts from different fields was held for the first time in Lviv region for the children’s interests

Childs’ smiles, who escaped from the shelling

The assistance to the doctors of the children's hospital, which is on Orlyka St.

Children from orphanages of Mykolayiv region visited the Oceanarium Lviv

For kids from orphanages of Mykolayiv region, to the International day for protection of children, was organized a picnic in Pustomyty city

Children from orphanages of the Mykolayiv region learned to play chess in Briukhovychi!

Felt themselves like football stars: children from orphanages of the Mykolayiv region visited one of the best football academies in Ukraine

Unforgettable meeting with the prehistoric animals: children from orphanages of the Mykolayiv region visited Dinosaur Park

Volunteer assistance to hospice in Nemyriv

The Constitution Day of Ukraine festival was held in Lviv

Continue to help the Ukrainian defenders and needy people

Joined the "Tree of Knowledge" initiative

Sweat, pain and tears changed to beauty, chocolate and lavender

The new “Box of Goodness” was opened on “Stryiskyi Rynok”

Another help to a needy family

Let’s make physics and chemistry classroom for the children from the Training and Rehabilitation Center - join us!

Thanks to the "Box of goodness", five low-income families from Lviv received products