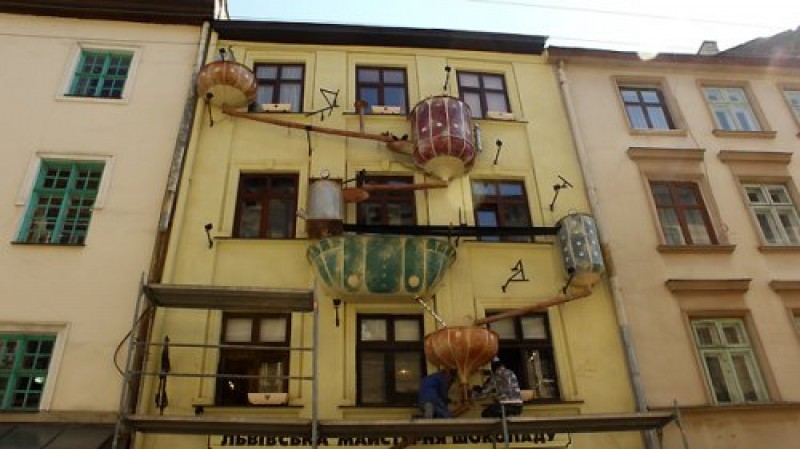 Instagram
THE CRUX OF THE MATTER:
The lawyers of the NGO "Community Development" held a public inquiry, regarding the lease of premises for 1UAH per year, in the Lviv City Council.

GO IN ORDER:
We all know that rent in the city center is not available to everyone because of its high value. However, there is a scheme which allows "favorites" to rent them for just 1 UAH.

During the public inquiry, the activists learned that a lot of the premises under lease agreements are provided by Lviv Municipal Enterprises (LME) for 1 UAH per year, in fact, used by entrepreneurs to run their business and profit, that is, state-owned premises are used for other purposes.

However, what we have in reality. Here is an example. At the request of activists, there were given information about who rents space from the City Council for 1 UAH,and at what addresses, and copies of rental contracts with the Lviv public utilities. Of the provisions of one of them is seen, that the room of 22 m2 at the address: Lviv, str. Serbska, 3, which is one of the best institutions of the city, rent Lviv municipal enterprise "Old Lviv". According to item 2.1. agreement, the facility lease, the utility should be used for official purposes. After a visit to the site, activists found that as for 29.08.2016, the building on the street Serbska, 3 has no other entrance except the main entrance, where the entertainment establishment. Also it has no extensions and add-ins that could indicate the presence of the LME.

In addition, after receiving information from the State Register of Rights to Immovable Property, the owner of the premises with an area of 580.7 m2, which is located on the street Serbska, 3 is "SHOKOOOOOOOOOLAD".

Visiting the establishment and finding no right room, we asked the sellers where is it located LME "Staryi Lviv," to which they just shrugged their shoulders, saying that they had not heard anything, and all floors are available only to departments of the chocolate workshop. How Lviv City Council rents space without a separate entrance in the whole house, we do not know.

Why did this happen? Who knows. Probably, in the budget of the city Lviv there are too much money, if officials so lightly give in rent premises in the town centre, which could bring a huge amount. Or maybe the management of communal property is not losing its premises? Maybe not for 1 UAH?

LEGAL ASPECTS OF THE CASE:
The lawyers of the NGO "Community Development" has sent information requests to the Lviv City Council, particularly in the management of communal property. After receiving the information and duly certified copies of contracts, lawyers have spent their legal analysis and compared with the real situation. The result was information on who actually rents space for 1 UAH, bypassing the norms of law.

In addition, was sent a request to the Department of municipal property of the LCC and LME "Staryi Lviv" for the purpose of obtaining answers to specific questions regarding the lease.

THE RESULT:
What is the situation today?! Lviv City Council gives de jure to rent non-residential premises per 1 UAH per year to utilities, and de facto they are entrepreneurs who get rich at the expense of the city budget. Where are the premises of utility companies, in addition to their main offices, remains a mystery, but in the city increases the number of entertainment and recreational facilities.

The continuation is expected soon...