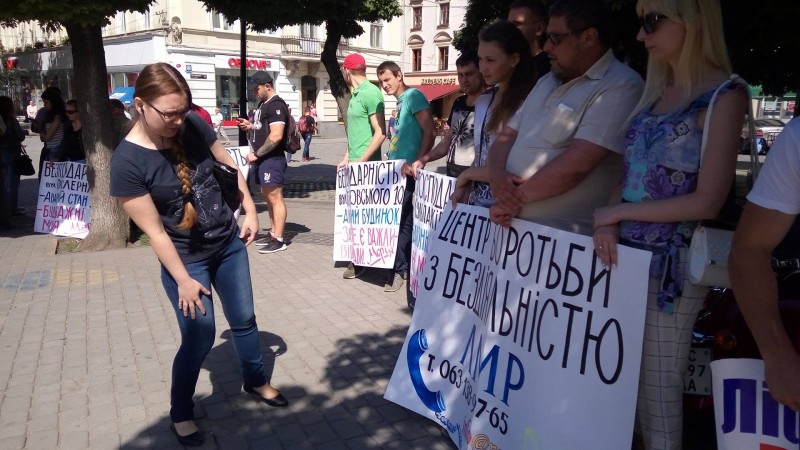 Instagram
Lviv activists continues the action " Promised, but never did." As a consequence, have formed the public Centre against the inaction of the LCC. Here are treated the city residents with their problems, which officials ignore.

Daily, for one hour, activists are in the Central part of the city with posters about the problems of the city. Today, July 6, the activists were on the pr. Chornovola. Posters increases every day, as increases the number of new cases of illegal construction, lack of places in kindergartens, land fraud, obstruction of business activities and etc.

The activists want to force officials to carry out their work and their promises, that is why a silent rally turned into a fight with the inaction of the LCC. Participation in the activities of the center can take anyone.

The hot line is open, one can turn to with problems and ask for help from activists: 063 138 97 65.
The action was joined by activists of the NGO “Community Development” , "Patriot", NGO "Lviv Regional Union of Social Protection of ATO Soldiers and Families of the Victims", as well as concerned and active citizens.

Recall silent action "Promised, but never did" began on June 22 and will continue in the future.

Under the walls of Lviv City Council continues silent protest

Protests continue on the streets of Lviv

In Lviv again was a silent protest

The eleventh day of silent action today on prospect Shevchenko

On the first of September the strikers-buses came to routes

Strike of carriers in Lviv

In Lviv, because of the strike, are out of walk half of minibuses

Carriers are still waiting for concrete solutions from the public authorities

Igor Senyk had a heart attack after a conversation with Shchyr

Viktor Shchyr wants to be imprisoned

3 Lviv schools won the competition dedicated to the “Vyshyvanka's Day”

The “Vyshyvanka's Day” was solemnly opened in Lviv

Summer camp for the children of the ATO heroes is opened

Famous Lviv citizens cleaned up the dirtiest area of Lviv

"My holidays started cool!" - the daughter of the killed ATO soldier